Summary: Creates the option next to edited and deleted Reddit comments/posts to show the original comment from before it was edited

Creates a link next to edited and deleted Reddit comments and submissions to show the original post from before it was edited/removed.

This script is compatible with both Reddit's Redesign and Old Reddit.

The Pushshift Reddit API is used for fetching the comments as they will be archived soon after they have been posted. 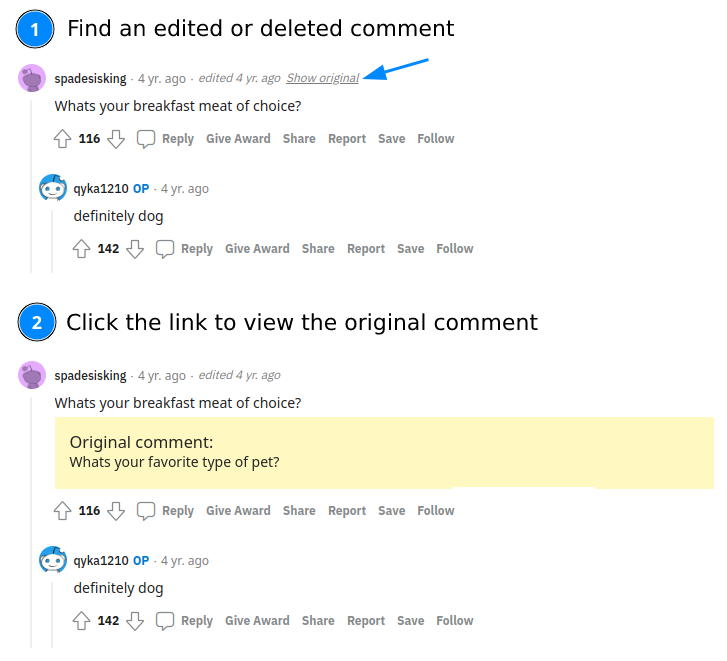 This script can be installed on most browsers using userscript browser extensions such as Violentmonkey, Tampermonkey, among others using the green button on Greasy Fork.

Alternatively, you may copy the contents of script.js into a new script using any userscript browser extension.

As a Chrome Extension

Install from the Chrome Web Store, or alternatively, download or clone this repository, enable "Developer mode" at chrome://extensions/, and load the folder unpacked.

As a Firefox Addon

Install from Mozilla Add-ons, or alternatively, follow these steps to build and install from the source:

To sign the extension for use in Firefox, you will need credentials from https://addons.mozilla.org/en-US/developers/addon/api/key/. Create a copy of .env.example named .env and replace the placeholders with your API key and secret. Install web-ext with npm install -g web-ext and sign the extension with make sign-firefox. The generated extension will appear as a .xpi file in ./web-ext-artifacts. This file can be opened in Firefox to install the add-on.

The following are known limitations that cannot be fixed: